I first met him when I was in graduate school. We performed together in a conservatory production of Stravinsky’s Les Noces, he on the timpani and I in the chorus.

Those were the days when I was directing and doing some composing and arranging for Connection, a vocal jazz ensemble at the conservatory. (For choral nerds, that ensemble was originally formed by Kirby Shaw.) Inspired by the soulful, honest, kind, confident, smart, gentle, patient, articulate, brown-eyed, uber-talented, flannel-wearing, mallet-wielding percussionist with the rolled-up sleeves and goatee, I wrote this little ditty called “First Impressions.”

You might say that I was feeling all smooshy and gushy about the guy.

My singer-students surprised us the next summer by standing up and singing the song at our wedding reception. The memory still fills my heart with warmth and gratitude.

Happy Anniversary, Michael. You still take my breath away. 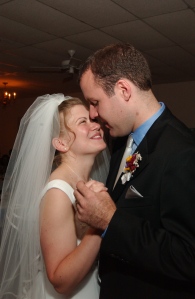