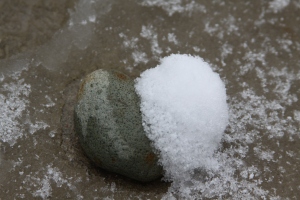 Sin – all Sin, Adam and Eve’s, yours and mine – leaves our world broken, laboring in pain for the resurrection when all things will be made new. Sin leaves even our children broken, and so we miscarry.

Hear from a grieving mother, your sister in Christ:

Have you ever tried to catch a snowflake, anxious to see its intricacies, only to find that it has melted before your eyes even had a chance to focus? Have you ever seen a flash in the sky and turned around just as the last sparkles of a shooting star vanish, only to realize you missed the show? But then there are other times when you’re walking out of a store, late in the evening, tired from the days events, when suddenly the whole sky lights up right in front of you, right over your head, and the shooting star seems so close you could reach up and touch it…and no one else even gets to see it. It’s like it was only for you, and you didn’t even ask for it.

When I think of the baby that just died in my belly before I was even big enough to change into maternity clothes, I don’t think of the melting snowflake…I think of the shooting star that lit up the sky right in front of my face. I did not deserve Anastasia. My sin and status as a fallen creature is so interwoven into my being that its claws reach not only into my own life…but into the flesh of my children. It is evident in Anastasia’s death. It was not just my sin, but our sin. We all share in the sin that leaves us broken, weeping, alone, sick, and sometimes…in despair. We all share in death because we all share in sin, in our sin.

But there’s something else we all share in…our Savior. Anastasia was bathed in the blood of Christ. Her little ears were covered in God’s Word. And her home, for twelve weeks, was the body of one Baptized into Christ and made a temple of the Holy Spirit by God’s gift of Holy Baptism.

The doctors offered to let me have a D&C the day we found out Anastasia had died. But I couldn’t go. I was so overcome with my sin, with it’s effects, that I needed to grieve and confess. I have never wept so hard or long. Then I called a dear sister in Christ and, when she answered, I burst into tears telling her I didn’t even know why I was calling. We wept together.

And in Anastasia’s death, in my sin, I felt dead with her. But Jesus, He was dead too. Not half dead, not a little bit dead, He was dead. He was dead in our trespasses and sins. Have you ever thought about and wondered what those three days must have been like for His followers? God was dead. They were alone. And to add salt to the wound, they had to carry on in the work and physical labor of burial while grieving. And yet they were still alive. God’s power was enough to sustain His creation even when He was dead.

I carried Anastasia for twelve weeks. And then I carried her, dead, for ten days. One of those days was Ash Wednesday. I will never forget carrying her to the front of the church to receive ashes on my forehead. Presenting my other children for ashes felt like I was handing them over to death as well. Knowing that I infected them with the same sin that poured out death on my sixth child was unbearable. We were all being marked with death…but, it was death in the shape of life, even while I carried death inside of me.

And then I went into labor. I labored for five hours at home. I’ve given birth four times at home to our living children and the pain was no less in duration or strength to birth one so small. When she came I scooped her up and I held my snowflake. Twelve weeks with ten fingers and ten toes, two tiny ears and her mouth open just far enough that I could see her tongue and gums. She is God’s tiny miracle, put right into my hands for me to behold. She might be gone now, as quickly as a shooting star, but she was there, she was mine, and I am overcome with God’s mercy, goodness, and love for us sinners before we yet knew Him. The Lord is merciful. He forgives all. And because we are adopted by His grace, we and our children are adopted into LIFE. Death is not the end of Anastasia’s story, or of my or your stories. Easter is coming. Come soon, Lord Jesus.