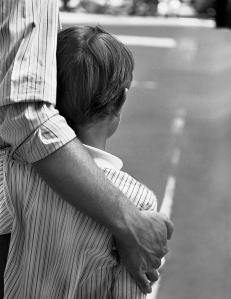 Thank you to Kelly Stout for reminding us of all that comes with being chosen as an adoptive parent.

“Joseph’s Worthiness (and My Own)”

I carry around a strange sort of guilt – one that only those blessed by adoption can probably understand. Why in the world did God and my son’s birthmother choose me? Oh, it is loaded with guilt. When I fail as a mother, I fail my child, I fail God, and I fail my child’s birthmother. I don’t talk about it often, because it makes people uncomfortable. My reality of feeling guilty for being chosen when others have been waiting weighs on me. I see my friends struggling to conceive, I see my friends waiting with great anticipation to be chosen as adoptive parents, and I see myself failing so often in my vocation.

We don’t know very much about Joseph’s emotions as being chosen as an adoptive father. We all know Mary asked, “Why me?” Given my own guilt about the vocation of caring for a son entrusted to me through adoption, I can only imagine that Joseph felt unworthy. “The Son of God? You want me to be responsible for raising the Son of WHO? Why have I been chosen when all those other men are so much better than me?” At least, that is how I feel at times. “Those other women would probably do a better job than me…” When, in fact, that guilt is very far from the truth.

In teaching our toddler son about his infant adoption, we tell him, “Your birthmother loves you so much that she asked God to help her choose a mommy and daddy for you. And you know who He chose for you? Us, your Mommy and Daddy!” When I say those words, I am not only teaching my son about God’s love for him, I am also reminding myself God did indeed choose us. We were given this child, not because we deserve him, not because we are better than anyone else, but because before he was conceived God knew him and knew all the days numbered for him even before there were any of them. He gave us the vocation of father and mother. He entrusted this little babe to us. He will provide us with the wisdom and strength needed to raise him in the way of the Lord.

When Joseph looked around, saw his own sin and failure, and wondered, “God, why was I given this Gift when others were not,” I hope he was reminded that those others, all others indeed, were given the same Gift. The Gift bore our guilt on a cross, died, and rose again, so that with Joseph, we need not question our worthiness in our vocations. Our worthiness is declared through Him.