Pastor Mark Surburg, in his sermon preached on March 24th of this year at Good Shepherd Lutheran Church in Marion, Illinois, draws from the wisdom of Martin Chemnitz in applying Jesus’ admonition of His disciples (Mark 10:13-16) as comfort for Christians grieving a miscarriage.

Pastor Surburg graciously granted us permission to reproduce a portion of his sermon here. You can read the sermon in its entirety on his blog. 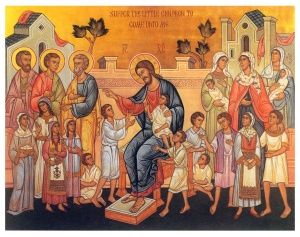 [T]he loss of a baby in miscarriage is a source of profound grief. The joyful expectation of knowing this little one abruptly ends, and we are left with nothing but sonogram images. Where a miscarriage occurs in the setting of ongoing fertility problems, it can be particularly crushing.

For this very reason Jesus said, “Truly, truly, I say to you, unless one is born of water and the Spirit, he cannot enter the kingdom of God.” Our Lord has given us Holy Baptism as the means by which babies receive a washing of the new birth in the Holy Spirit, and become saints forgiven because of Christ. What then are we to say about these babies who were never born alive, and so never could receive rebirth in Holy Baptism?

Our text from Mark chapter ten provides encouragement to think about these things on the basis of our Lord’s word. It does not provide an exact answer. But it sends us to Christ in faith and hope. Mark begins by telling us, “And they were bringing children to him that he might touch them, and the disciples rebuked them.”

Presumably parents were bringing their children – and the term used here includes very young children – so that Jesus could touch them. Now in Mark’s Gospel, every other time that Jesus touches someone it is order to provide healing. The saving power of the kingdom of God – the reign of God – was present in Jesus. People recognized this. On three different occasions in the gospel, Mark tells us that people in need of healing hoped to touch Jesus, or even just to touch his clothes.

However, we learn that when this happened “the disciples rebuked them.” Since the text never actually mentions who brought the children, I think we have to assume that the “them” refers to the children themselves. This fits with an important piece of cultural background that we need to understand.

In our world children are revered. They are viewed as pure and untainted sources of wisdom. “Listen to the children” we are told. However, in the ancient world children were viewed as inferior because they were helpless and not able to work like adults; they were physically weak; they were likely to get sick and die; they were not guided by reason. They were looked down upon and were not held up as role models for adults to imitate.

But in response, the Lord Jesus was indignant about what the disciples were doing. He commanded them, “Let the children come to me; do not hinder them, for to such belongs the kingdom of God. Truly, I say to you, whoever does not receive the kingdom of God like a child shall not enter it.” And then Jesus took children in his arms – he embraced them – and blessed the children, laying his hands on them.

Jesus says in our text that the kingdom of God – the saving reign of God – was meant for those children. It was his will for them to receive it. He did not want them hindered from being brought to him. In the experience of miscarriage these words give us comfort and hope. Jesus wants these children in the womb to receive the reign of God. When Christian parents are prevented by miscarriage from bringing a child to baptism, we take comfort in the knowledge that our Lord does not want children to be hindered from receiving his saving reign.

Jesus Christ was so intent on bringing the reign of God that he suffered and died on the cross for you; for me; for every child we have lost in miscarriage. It is in this same chapter that our Lord says, “For even the Son of Man came not to be served but to serve, and to give his life as a ransom for many.” Christ offered himself up in the suffering of the cross as the sacrifice for our sin.

But God’s reign in Christ could not be defeated by death.  Instead, Jesus passed through death in order to defeat it.  On the third day God raised Jesus from the dead. In his resurrection Christ has conquered death – even the death of infants in the womb. He has begun the resurrection of the Last Day that he will bring to completion for us when he returns in glory.

We entrust the little ones we have lost to the crucified and risen Lord. He has said that the kingdom of God belongs to such as these. He has said that he does not want them hindered from being brought to God’s reign. We know that he has bound us to the Means of Grace. But as God he knows no limitations. Indeed, it is immediately after our text that in response to the disciples shocked question, “Then who can be saved?”, that our Lord says: “With man it is impossible, but not with God. For all things are possible with God.” We know the kind of Lord that Jesus has revealed himself to be in his death and resurrection, and so in hope and faith we entrust these little ones to him. They rest in his hands. That is all we need to know, because we know him.

And because we know him, we find comfort in the midst of our grief. In our text Jesus says, “Let the children come to me; do not hinder them, for to such belongs the kingdom of God.” Our Lord declares that the kingdom of God – the reign of God – belongs to children. It belongs to those who were considered weak and helpless – those who had nothing to offer.